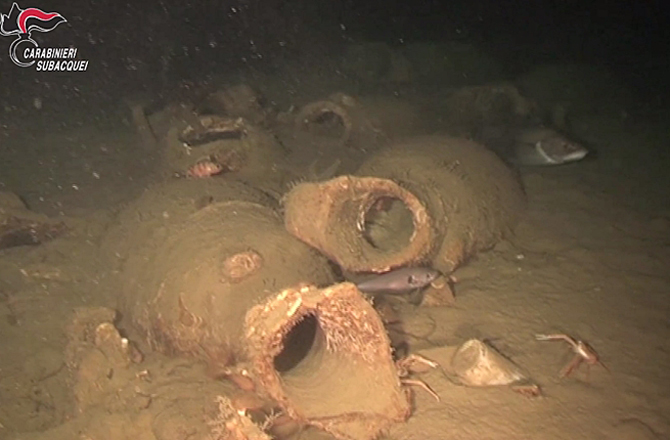 ALASSIO, ITALY—A Roman ship dating to between the first and second century A.D. has been found off the Ligurian coast. Italy’s scuba diver-police force, the Carabinieri Subacquei, assisted with the investigation of the wreck, which rests under more than 650 feet of water. The ship is estimated to have been nearly 100 feet long and, due to the shape of most of the amphoras on board, it is thought to have been carrying a load of garum on a route between Italy, Spain, and Portugal. “After we filmed the wreck and analyzed an amphora and some fragments that a robotic craft brought back to the surface, we realized the ship was carrying a huge quantity of fish sauce when it sank,” team leader Simon Luca Trigona of the Archaeological Superintendency of Liguria told The Local. Other jars only made in the area around the Tiber River in Rome suggest the vessel carried Italian wines to the Iberian Peninsula. “It’s a nice find because it means we are almost sure about the route this ship was on,” Trugona said. To read about how maritime trade fueled the growth of the Roman Empire, go to "Rome's Imperial Port."