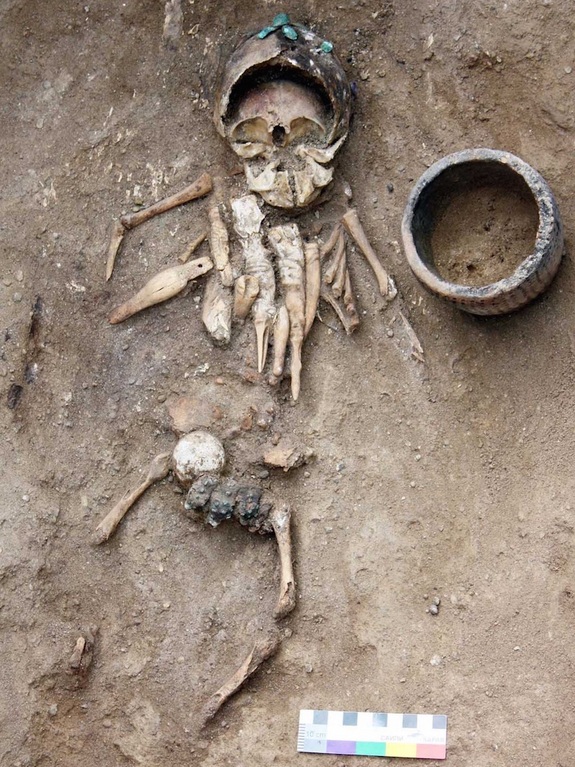 REPUBLIC OF KHAKASSIA, RUSSIA—Live Science reports that a 4,500-year-old burial of an infant less than one year old at the time of death has been found on the northwest shore of Russia’s Lake Itkul, in a kurgan constructed by the Okunev culture. Archaeologists Andrey Polyakov of the Institute for the History of Material Culture and Yury Esin of the Khakassian Research Institute of Language, Literature and History, wrote in Archaeology, Ethnology & Anthropology of Eurasia that the child had been buried in what appears to be a birch bark cradle with “eight miniature horn figurines representing humanlike characters and heads of birds, elk, boar, and a carnivore.” The figures, made from deer antlers, bear traces of red paint and were found on the infant’s chest, but they may have been attached to the cradle as toys or charms. “Some of [the figurines] have internal cavities and, upon coming in contact with each other, could produce noisy sounds like modern rattles,” the authors explained. The child had been buried wearing headgear made from 11 small copper plaques and two metallic cones held together with leather laces. An earring was found near the child’s head. To read about infant burials elsewhere in the world, go to "Peru’s Mysterious Infant Burials."