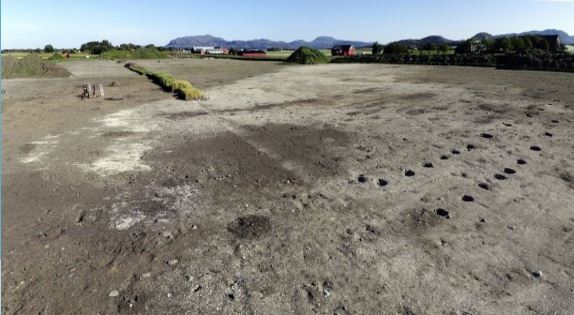 TRONDHEIM, NORWAY—A large excavation conducted by a team from the Norwegian University of Science and Technology (NTNU) on Norway’s Ørland peninsula has uncovered a 1,500-year-old settlement. “It was a sheltered area along the Norwegian coastal route from southern Norway to the northern coasts. And it was at the mouth of Trondheim Fjord, which was a vital link to Sweden and the inner regions of mid-Norway,” project manager Ingrid Ystgaard said in a press release. So far, the team has found traces of two parallel longhouses connected by a smaller building. Several fire pits, at least one of which was used for cooking, were found in one of the longhouses. Ground-up seashells in middens at the site helped to preserve the bones of animals and fish, including salmon, cod, and seabirds, that usually don’t survive in Norway’s acidic soil. “Nothing like this has been examined anywhere in Norway before,” Ystgaard explained. Her team has also recovered a blue glass bead, several amber beads, and a piece of a green drinking glass that was probably imported from Germany’s Rhine Valley. “It says something that people had enough wealth to trade for glass,” she said. To read about a Viking sword excavated in Norway, go to "Artifact."