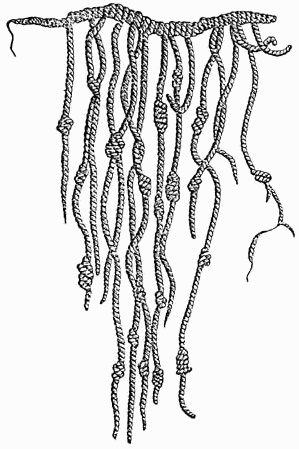 LIMA, PERU—The Inca used a series of knotted strings hanging from a main cord, a device known as a khipu, to keep records. Researchers have had a basic understanding of the numerical system and mathematical operations used in khipus, but have not known how to decipher other information kept in the strings. According to The New York Times, for the first time, archaeologists led by archaeologist Alejandro Chu have discovered 29 khipus in a storehouse, rather than in the graves of scribes, at Incahuasi, where they appear to have been used to keep track of peanuts, chili peppers, beans, corn, and other agricultural products. “We can look at how the chili pepper khipu differs from the peanut khipu and from the corn khipu in terms of their color and other characteristics and we can build up a kind of sign vocabulary of how they were signifying this or that thing in their world,” Gary Urton, a member of the Khipu Database Project at Harvard University’s Dumbarton Oaks. He has created a database of detailed information of some 870 khipus. “If we can find the connection between the khipu and the product that it was found with we can contribute to the deciphering of the khipus,” Chu explained. To read more about the Inca, go to "The Water Temple of Inca-Caranqui."