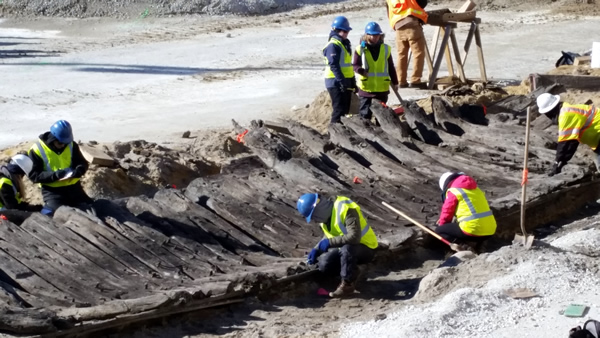 ALEXANDRIA, VIRGINIA—City archaeologists and a team from Thunderbird Archaeology have found about one-third of a 50-foot vessel at a construction site in Alexandria, Virginia. The ship is thought to have been scuttled in the late eighteenth century and used for landfill that extended the city’s thriving waterfront into the deep channel of the Potomac River. The archaeologists are using 3-D laser scanning equipment to record the well-preserved, sturdily built hull, which will be dismantled and maintained in a wet environment while researchers continue to study it. According to a press release from the city of Alexandria, this discovery may represent a type of vessel that has not yet been documented through archaeological research. To read about an eighteenth-century ship discovered in Manhattan, go to "The Hidden History of New York's Harbor."