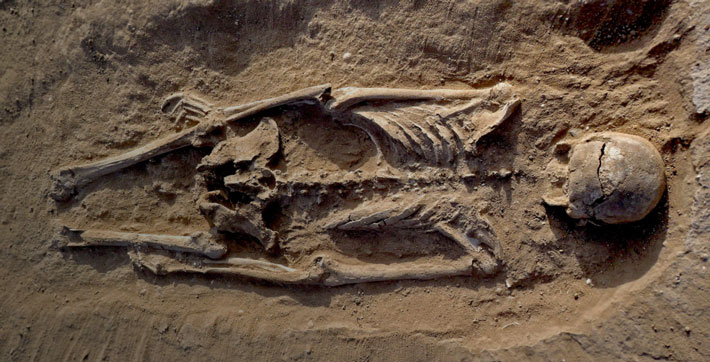 CAMBRIDGE, ENGLAND—The remains of a group of hunter-gatherers killed on the shores of Lake Turkana some 10,000 years ago have been uncovered by a team from the Leverhulme Center for Human Evolutionary Studies at the University of Cambridge. The partial remains of 27 people include the skeletons of at least eight women—one of them pregnant—and six children. All of the remains had been left where they fell. The position of the hands of four of the individuals suggest that they had been bound. Ten of the sets of remains showed clear signs of violent death, including extreme blunt-force trauma to crania and cheekbones, broken hands, knees, and ribs, and arrow lesions to the neck. Projectile tips were found embedded in the skull and thorax of two men. “The deaths at Nataruk are testimony to the antiquity of inter-group violence and war. These human remains record the intentional killing of a small band of foragers with no deliberate burial, and provide unique evidence that warfare was part of the repertoire of inter-group relations among some prehistoric hunter-gatherers,” project director Marta Mirazón Lahr said in a press release. To read about forensic evidence for a medieval massacre, go to "Vengeance on the Vikings."