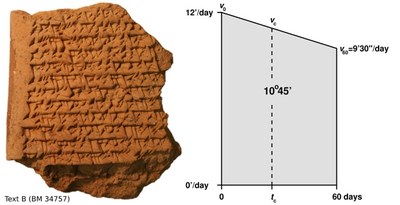 BERLIN, GERMANY—Historian of science Mathieu Ossendrijver of Humboldt University, using the texts from three published and two unpublished cuneiform tablets from the British Museum, realized that the Babylonians calculated the position of the planet Jupiter with geometrical methods between 350 and 50 B.C. It had been thought that Babylonian astronomers used only arithmetical methods, and that such geometrical computations were not carried out until the fourteenth century. Ossendrijver had been studying four tablets with texts that describe trapezoids when Hermann Hunger of the University of Vienna brought him a photograph of a fifth, uncatalogued tablet that does not describe a trapezoid, but does describe an astronomical computation that is mathematically equivalent to the others, and can be assigned to Jupiter. “The crucial new insight provided by the new tablet without the geometrical figure is that Jupiter’s velocity decreases linearly within the 60 days. Because of the linear decrease a trapezoidal figure emerges if one draws the velocity against time,” Ossendrijver explained in a press release. “It is this trapezoidal figure of which the area is computed on the other four tablets.” To read more about ancient people's perceptions of planetary motion, go to "An Eye on Venus."