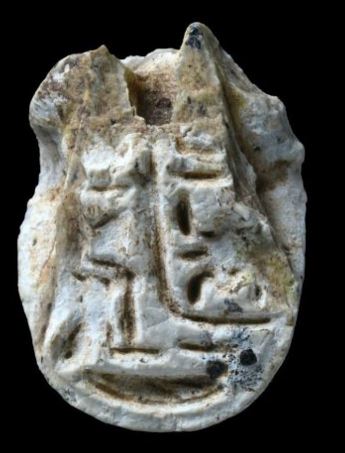 KARNEI HATTIN, ISRAEL—A hiker discovered a 3,500-year-old Egyptian seal in the Lower Galilee on the Horns of Hattin, so-called for the twin peaks of an extinct volcano where a fortified citadel stood in the late Bronze Age. Recent rainstorms may have brought the artifact to the surface. The man handed the seal, carved in the shape of a beetle, over to the Israel Antiquities Authority. “The scarab represents Pharaoh Thutmose III (1481-1425 B.C.) sitting on his throne, and before him is a cartouche—an oval shape that contains symbols representing his name in hieroglyphics,” curator of Egyptian archaeology at the Israel museum Daphna Ben-Tor told Haaretz. “Thutmose ruled for many years during the fifteenth century B.C., and during his reign Egypt set up an administrative system of governance in Canaan. There, he waged many campaigns of conquest, of which the most famous was the battle of Megiddo in the Jezreel Valley—a victory documented in giant tablets on the walls of the Karnak Temple in [Luxor}, Egypt,” she explained. For more about Egyptian influence in the Levant, go to "Egyptian Style in Ancient Canaan."