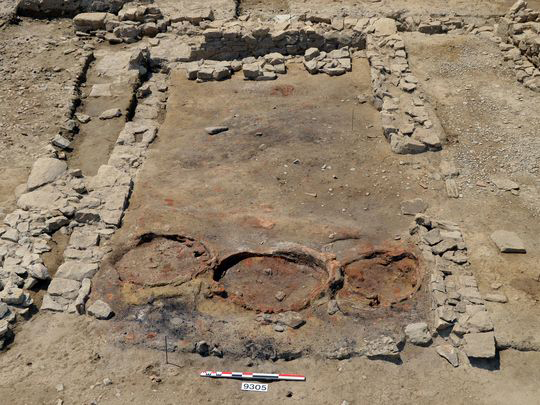 LATTES, FRANCE—A team of archaeologists has found a structure in southern France that they believe served as a restaurant around 2,100 years ago, after the Romans had conquered the area. The establishment was in the ancient town of Lattara, home to farmers before the arrival of the Romans and a more diversified economy afterward, which created demand for eateries outside the home. “If you’re not growing your own food, where are you going to eat?” archaeologist Benjamin Luley of Gettysburg College told USA Today. “The Romans, in a very practical Roman way, had a very practical solution … a tavern.” In one room, the researchers found indoor gristmills and ovens for baking flatbreads and, in another room across a courtyard, they found benches against the walls and a charcoal-burning hearth in the floor. There were fish bones on the floor of the kitchen and sheep and cattle bones in the courtyard. The researchers also found shards of drinking bowls from Italy as well as debris from large platters. For more on ancient Roman eating habits, go to “The Gladiator Diet.”