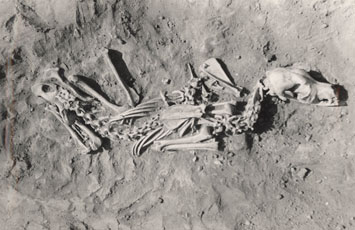 EDMONTON, CANADA—Robert Losey of the University of Alberta has unearthed the remains of dogs in an ancient cemetery at Lake Baikal, Siberia. The dogs had been buried between 5,000 and 8,000 years ago alongside their humans. “The dogs were being treated just like people when they died,” Losey said in a press release. “They were being carefully placed in a grave, some of them wearing decorative collars, or next to other items like spoons, with the idea being potentially that they had souls and an afterlife.” Chemical analysis of the bones of these dogs indicates that they had been fed the same foods eaten by the people that lived in the settlement. Across the Siberian Arctic, Losey has found evidence of dogs wearing harnesses, perhaps for pulling sleds. He’s also found evidence that people sometimes ate their dogs. “What can we learn about people’s relationship with dogs in the past? The history of our working relationships with animals, and our emotional relationships, is what interests me,” he said. To read more about the archaeology of dogs, go to "More than Man's Best Friend."