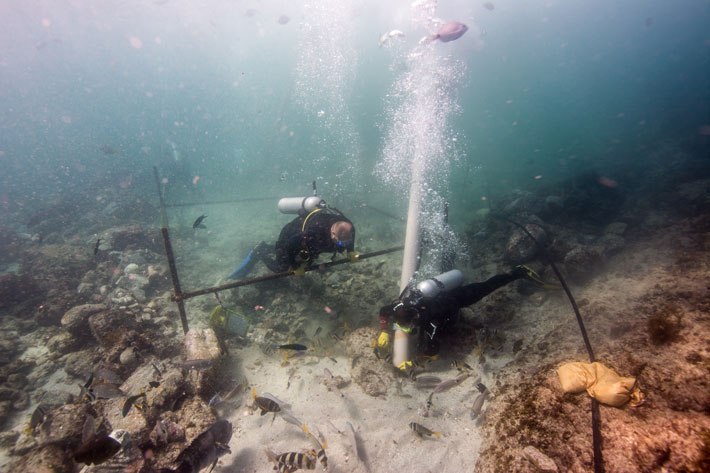 MUSCAT, OMAN—One of Vasco da Gama’s ships has been identified in the waters off the coast of Al Hallaniyah Island. The nau Esmeralda, a Portuguese East Indiaman, was commanded by Vicente Sodré, Vasco da Gama’s uncle, and was part of the Armada to India. It sank in 1503. More than 2,800 artifacts have been recovered, including a copper-alloy disc marked with the Portuguese royal coat of arms and the personal emblem of King Dom Manuel I; a bronze bell with an inscription that suggests the ship was built in 1498; gold cruzado coins minted in Lisbon between 1494 and 1501; and an Indio, an extremely rare silver coin commissioned by Dom Manuel in 1499 specifically for trade with India. Most of the artifacts are lead, iron, and stone shot; bronze breech chambers, and firearms. “This project differs from the majority of maritime archaeology projects in that we set out to specifically find the wreck site of the Sodré ships, using a survivor’s and other historical accounts, because of their very early age and the potential they held for new discoveries,” project director David L. Mearns of Blue Water Recoveries said in a press release. To read more about nautical archaeology, go to "History's 10 Greatest Wrecks."