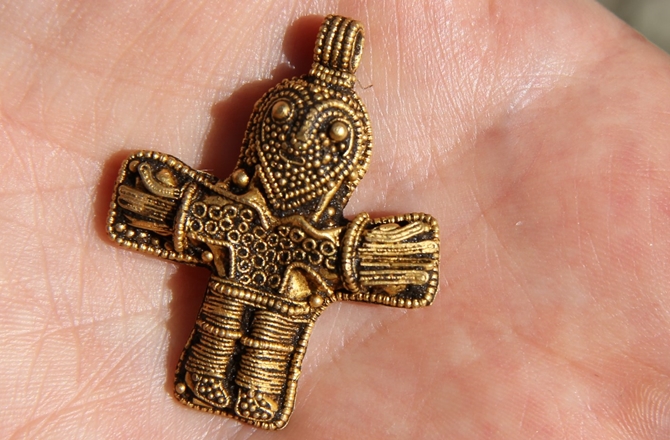 AUNSLEV, DENMARK—A rare Viking-era gold crucifix has been discovered in a field near the village of Aunslev. According to a press release issued by the Ladby Viking Museum, where the cross is set to go on display, the artifact was found by a metal dectorist who immediately alerted archaeologists to the discovery. Made in the shape of a man with outstretched arms, the crucifix is just under two inches high and has a small eye on its top that suggests it was once worn with a chain. In the nineteenth century, a similar cross was discovered in the grave of Viking-era woman in Sweden, and researchers believe the Aunslev crucifix also probably belonged to a woman. Dating to the first half of the tenth century, it is one of the oldest crucifixes to be found in Denmark. To read more about Vikings, go to "The Vikings in Ireland."