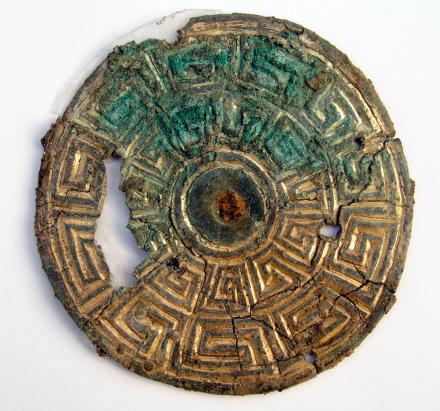 RANDERS, DENMARK—A gilt bronze buckle dating to more than 1,000 years ago has been found buried with a woman in a Viking grave in west Denmark. Determining the origin of the 2.4-inch-wide buckle has been a major challenge, according to archaeologist Ernst Stidsing of the Museum of East Jutland. Stidsing sent photos of the buckle to a colleague who was stumped and who sent them on to other experts. They agreed that it was from the British Isles, but were divided on exactly which part—some said Ireland, others the south of Scotland. They agreed, however, that the disc was originally a decoration on a religious box and was only used as a buckle after it was stolen. "It’s from a monastery or a church, and not necessarily Christian. But it’s very likely stolen goods—such objects were not traded,” Stidsing told ScienceNordic. “The Vikings didn’t come to own this sort of thing by honest means." The grave was dated to the tenth century A.D., and experts believe the buckle is from around 800 A.D. It is unclear how the buckle got to Denmark, though it is possible the woman was originally from Norway and obtained it there. To read more about archaeology in Denmark, go to “Bronze Age Bride,” which was one of ARCHAEOLOGY’s Top 10 Discoveries of 2015.