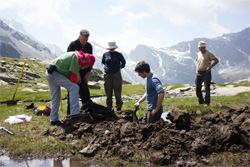 BELFAST, IRELAND—An international team of scientists believe they have found evidence that a “mass animal deposition” event occurred near the Col de Traversette pass some 2,000 years ago. The scientists, led by Bill Mahaney of York University in Toronto, claim that the deposition was left by the 30,000 men of the Carthaginian army, 37 elephants, and more than 15,000 horses and mules led over the Alps by Hannibal during the Second Punic War with Rome. This route through the Alps was first suggested as Hannibal’s path by biologist Sir Gavin de Beer some 50 years ago. “The deposition," said Chris Allen of Queen’s University Belfast in a press release, "lies within a churned-up mass from a three-foot thick alluvial mire, produced by the constant movement of thousands of animals and humans." The researchers say that over 70 percent of the microbes in horse manure are from a group known as the Clostridia that are very stable in soil—surviving for thousands of years. They report they have uncovered scientifically significant evidence of these same bugs in a genetic microbial signature precisely dating to the time of the Punic invasion. For more on archaeology in the Alps, go to "Ötzi, the Iceman."