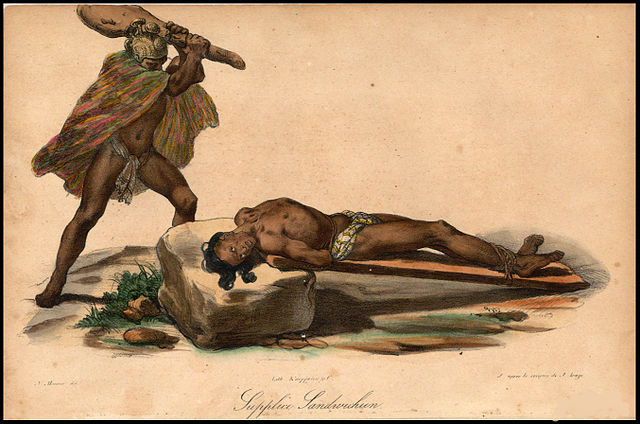 AUKLAND, NEW ZEALAND—A team of researchers from the University of Aukland’s School of Psychology, the Max Planck Institute for the Science of Human History, and Victoria University used computational evolutionary methods to analyze historical data from 93 Austronesian cultures organized into three main groups of high, moderate, and low levels of social stratification. Forty of the 93 cultures in the study practiced some form of ritualistic killing of humans—justified as a supernatural punishment—including burning, drowning, strangulation, bludgeoning, burial, cutting to pieces, crushing beneath a canoe, or rolling off the roof of a house followed by decapitation. The study found that cultures with the highest level of social stratification were most likely to practice human sacrifice, while more egalitarian societies were less likely to practice human sacrifice. “By using human sacrifice to punish taboo violations, demoralize the underclass, and instill fear of social elites, power elites were able to maintain and build social control,” Joseph Watts said in a press release. “What we found was that sacrifice was the driving force, making societies more likely to adopt high social status and less likely to revert to egalitarian social structure,” added team member Quentin Atkinson. To read about the tomb of a likely human sacrifice victim in Korea, go to "Mysterious Golden Sacrifice."