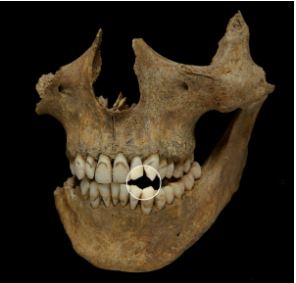 DURHAM, ENGLAND—Researchers from Durham University have examined the bones of up to 28 individuals thought to have been Scottish prisoners of war captured at the Battle of Dunbar in 1650 by the English army. Historical sources say that at least 4,000 men were taken prisoner and marched to Durham Cathedral and castle, where they were held. The bodies in the two graves had been placed there haphazardly. Marks on the bones, perhaps made by scavenging animals, suggest that the graves were left open over a period of time. According to a report in Chronicle Live, the scientists have found many of the individuals to have been between 13 and 25 years old at the time of death. The condition of their teeth suggests that the young men had experienced malnutrition and disease in childhood, and that some of them smoked pipes, which became popular in the 1630s. Their lack of healed wounds suggests that they had not had previous battle experience. “We would like to know more about the circumstances of the battle and march south, and see if we can find any evidence for other mass graves as yet undiscovered,” said Beth Upex of the University of Durham. To read more about historical archaeology in the British Isles, go to "Letter From Scotland: Living on the Edge."