People Could Have Pulled Bluestones to Stonehenge 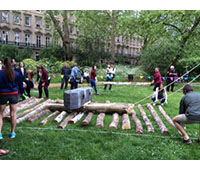 LONDON, ENGLAND—University College London archaeology student Barney Harris and a team of volunteers attempted to drag a 1.1-ton bluestone, lashed to a sycamore sleigh, on a track made of silver birch logs. Their goal was to see how much effort might have been required for Neolithic Britons to move bluestones from the Preseli Mountains in Wales to Stonehenge. Harris thought it would take at least 15 people to transport the heavy load, but he found that ten people were able to pull the stone some ten feet every five seconds, or potentially faster than one mile per hour. The experiment suggests that a group of just 20 Neolithic Britons may have been able to convey a two-ton bluestone over the 140 mile trip. “It’s true that we did the experiment on flat ground, and there would have been steep slopes to navigate when going through the Preseli Mountains, but actually this kind of system works well on rough terrain,” Harris said in a report in The Telegraph. Harris and his team will take the data from the experiment and calculate how long it might have taken to move all of the bluestones to Stonehenge. For more, go to "Quarrying Stonehenge."