Did Megalithic Tombs Double as Telescopes? 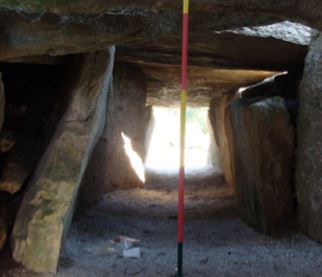 NOTTINGHAM, ENGLAND—According to a report in Live Science, prehistoric peoples living in what is now Western Europe may have built megalithic tombs as tools for observing the night sky and tracking the movements of the stars. “Different regions had their own traditions and architectural styles, but they are all variations on a theme,” said Daniel Brown of Nottingham Trent University. Spending the night inside these structures may have been part of a rite of passage that included watching the sky at dusk and dawn. In particular, passage graves, which have a large chamber accessed through a long, narrow entry tunnel, may have helped early astronomers see faint stars on the horizon. “The entrance creates an aperture as large as ten degrees through which your naked-eye view is restricted,” Brown said. Fabio Silva of the University of Wales Trinity Saint David added that knowing the positions of the stars at specific times of the year may have helped people time seasonal migrations. For more, go to "An Eye on Venus."