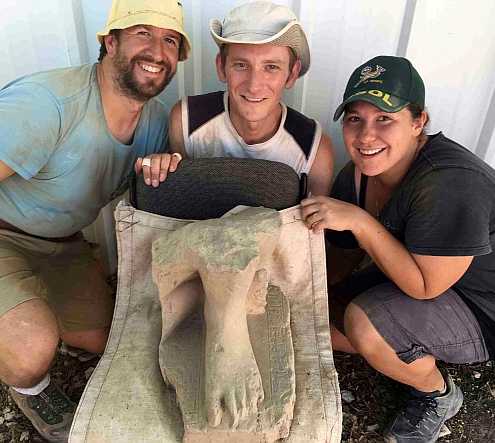 JERUSALEM, ISRAEL—A fragment of an Egyptian funerary statue dating to the third millennium B.C. has been unearthed in northern Israel by a team of archaeologists led by Amnon Ben-Tor of the Hebrew University of Jerusalem. According to a report in i24 News, the limestone fragment includes some of the base of the statue, which had been carved with hieroglyphics. A preliminary translation of the text suggests that it praises an official connected to the ancient city of Memphis, but his name and position are unknown. The fragment also depicts the feet of a crouching figure that may have represented the official. Scholars think the statue may have been originally placed inside his tomb, or in a temple dedicated to the Egyptian god Ptah, who was associated with the city of Memphis. This statue, and another third-millennium statue discovered in the same building at Hazor, are the only two monumental Egyptian statues from this period to have been unearthed in the Levant. The sculptures may have been sent to the ruler of Hazor from Egypt as gifts during the later New Kingdom period. The statues were probably destroyed around 1200 B.C., when the city was conquered. To read more about Egyptian artifacts discovered in Israel, go to "Egyptian Style in Ancient Canaan."