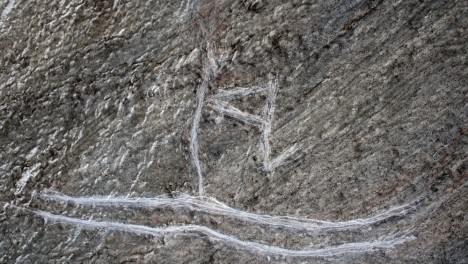 NORDLAND COUNTY, NORWAY—A faint 5,000-year-old carving depicting a figure on skis has been vandalized by a teenaged boy who used a sharp object to scratch over the original etching. The Local, Norway, reports that the perpetrator thought he was making the rock art easier for other visitors to see. Other images in the hunting scene, which is located on the island of Tro in northern Norway, were also defaced. “It’s a tragedy, because it’s one of the most famous Norwegian historical sites,” says Bård Anders Langø, mayor of the Alstahaug municipality. Archaeologists will study the damage to the site, but Langø says they suspect it is irreversible. For more, go to "Artifact: Norway Viking Sword."