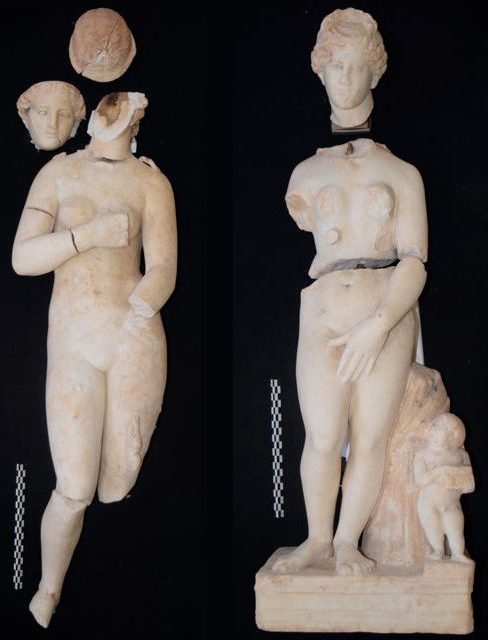 RALEIGH, NORTH CAROLINA—Live Science reports that a team of researchers discovered two marble statues representing the goddess Aphrodite, or Venus, at Petra, the ancient Nabataean capital. The team is codirected by Tom Parker, of North Carolina State University, and Megan Perry, of East Carolina University. Working in collaboration with the Department of Antiquities of Jordan, the team has been excavating in a previously unexplored area of the city known as the North Ridge, where non-elite residents are thought to have lived. Most of the pieces of the Roman-style statues, which date to the second century A.D., have been recovered, and they still retain traces of paint. One of the statues is still attached to its base and a figure of Cupid. The statues were found in a first-century villa complete with a bath complex that may have been abandoned and later used for debris storage after an earthquake in A.D. 363. Coins and pottery helped the archaeologists determine that the statues were probably placed in the building late in the fourth century. “The statues were packed in pretty tight—I think that’s what preserved them in such extraordinary condition,” Parker said. For more, go to "Mystery Buildings at Petra."