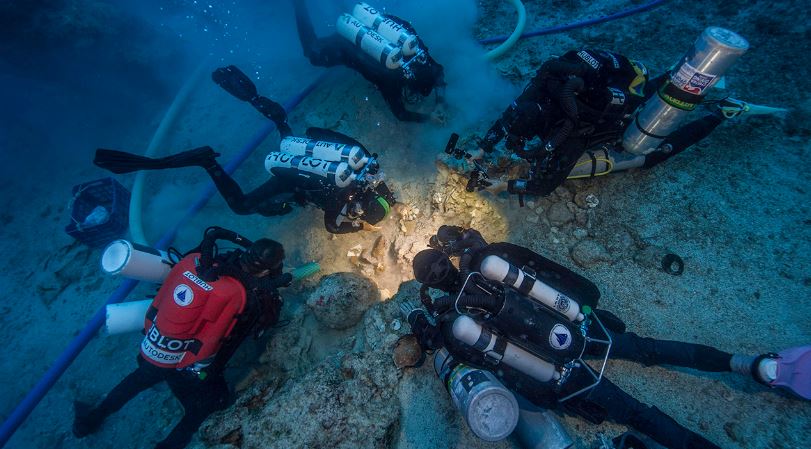 ANTIKYTHERA, GREECE—Nature reports that a set of human remains has been found at the site of the Antikythera shipwreck, known for the discovery of a clockwork device thought to have been used to track the motions of celestial bodies some 2,100 years ago. The remains of at least four people were recovered at the site in the 1970s. The newly discovered bones, which are red in color due to corroded iron artifacts at the site, include a partial skull with a jaw and several teeth, long bones from the arms and legs, and ribs. They were found under about 18 inches of sand and pieces of pottery by underwater archaeologists from the Hellenic Ministry of Culture and Sports and the Woods Hole Oceanographic Institution. Over the years, the sand and debris protected the remains from hungry fish and sea currents. Hannes Schroeder of the Natural History Museum of Denmark says that the size and condition of the bones suggest that they belonged to a young man. Schroeder also explained that both petrous bones—small, dense bones located behind the ear—have been recovered by the excavation team. “If there’s any DNA, then from what we know, it’ll be there,” he said. To read about another underwater discovery in Greek waters, go to "The City That Wasn’t."