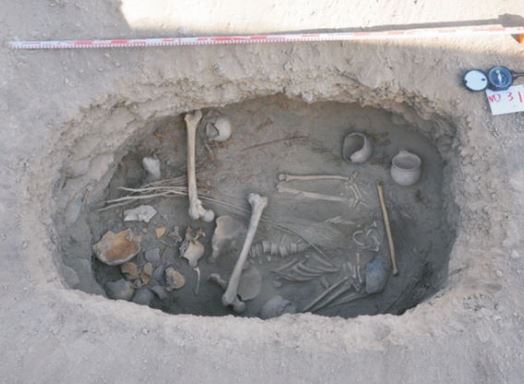 BEIJING, CHINA—Live Science reports that 13 Cannabis plants were discovered covering a man’s body in a 2,500-year-old burial located in the large Jiayi cemetery in arid northwestern China. About 35 years old at the time of death, the man was placed on a wooden bed with a reed pillow. The root-ends of the Cannabis plants were placed over his pelvis, so that the leaves reached his chin on the left side of his face. Hongen Jiang of the Chinese Academy of Sciences and his team suggest the burial occurred in the late summer, since the plants bore immature fruit. They also suggest that the lack of hemp clothing and rope in the burial, and the large size of the plants’ seeds, indicate that they were grown for their psychoactive properties. Pottery from the cemetery suggests that it belonged to the Subeixi culture of the Turpan Basin. Processed Cannabis flowers were found in another Subeixi graveyard in 2006. For more, go to “China’s Legendary Flood.”