Reconstruction Offers a Possible Glimpse of Robert the Bruce 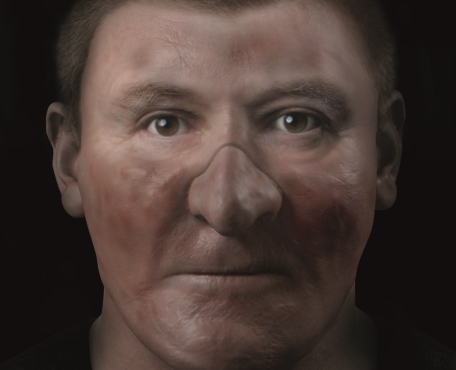 GLASGOW, SCOTLAND—Researchers from the University of Glasgow and Liverpool John Moores University (LJMU) have reconstructed the face of Robert the Bruce, who ruled Scotland from 1306 to 1329, according to a BBC News report. His remains are thought to have been unearthed at Dunfermline Abbey around 1818, and although the bones were sealed in pitch and reburied, a cast of the skull was made and has been kept in a London museum. Nothing is known about Bruce’s appearance, but documents record that he suffered from an illness. The position of the skull bones in the cast allowed researchers to infer Robert's facial muscle formation and determine the shape and structure of his face, said craniofacial expert Caroline Wilkinson of LJMU. The team also found signs of leprosy on the upper jaw and nose of the skull cast, so they created versions of the king’s face with leprosy and without the disease, explaining that its effects may not have been very noticeable, since it was not documented. The researchers also gave the strong warrior king light brown hair and eyes in the reconstruction, based upon statistical evaluation. For more on Robert the Bruce, go to “Bannockburn Booty.”