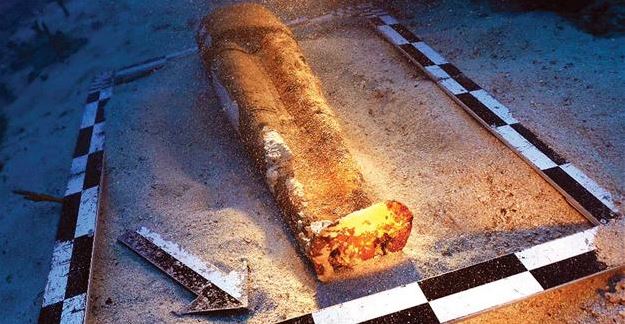 IZMIR, TURKEY—Hürriyet Daily News reports that a 2,700-year-old terracotta statue has been discovered at a shipwreck site under more than 140 feet of water off the coast of southwestern Turkey. The statue, discovered by a team of archaeologists from Dokuz Eylul University, is of the lower half of a woman’s body, and is thought to represent a Cypriot goddess. The statue and other cargo items, including ceramic plates and amphoras, had been covered with sand. “When we cleaned its surroundings, we saw the toes of the sculpture,” said team leader Harun Özdaş. “Then we uncovered the lower part of the body. The goddess sculpture had a dress on it. We know that such sculptures were made of two pieces. This is why we believe that the upper part of the sculpture is in the same place.” The team will return to the site, with the permission of Turkey’s Culture and Tourism Ministry and the support of the Development Ministry, to look for the rest of the goddess later this year. To read about another discovery in Turkey, go to “In Search of a Philosopher’s Stone.”