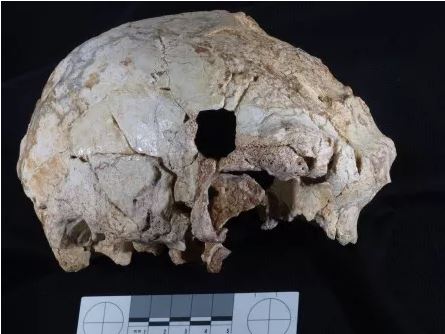 MADRID, SPAIN—According to a report in the Christian Science Monitor, a 400,000-year-old skull has been found at Gruta da Aroeira in Portugal, along with animal bones and Acheulean stone tools. The fossil was freed from a block of sediments at the Centro de Investigacion Sobre la Evolucion y Comportamiento Humanos over a two-year period. The partial skullcap, pieces of jaw and nasal floor, and two fragmentary teeth exhibit a mixture of traits, including some that are similar to those attributed to Neanderthals, and others to Homo erectus. Paleoanthropologist Erik Trinkaus of Washington University in St. Louis has suggested that archaic members of the genus Homo were all one species exhibiting different, regional combinations of traits across the Old World. “What this fossil does for me is it reinforces what I’ve maintained for some time that this is all just normal variation,” he said. Genetic analysis of archaic human remains indicates that different groups may have interbred and produced viable offspring, an ability attributed to creatures in the same species. “My opinion would be that this fossil stresses the need to overcome the species question in order to understand the humans living in Eurasia about half a million years ago,” added João Zilhão of the Catalan Institution for Research and Advanced Studies. For more, go to “A Traditional Neanderthal Home.”