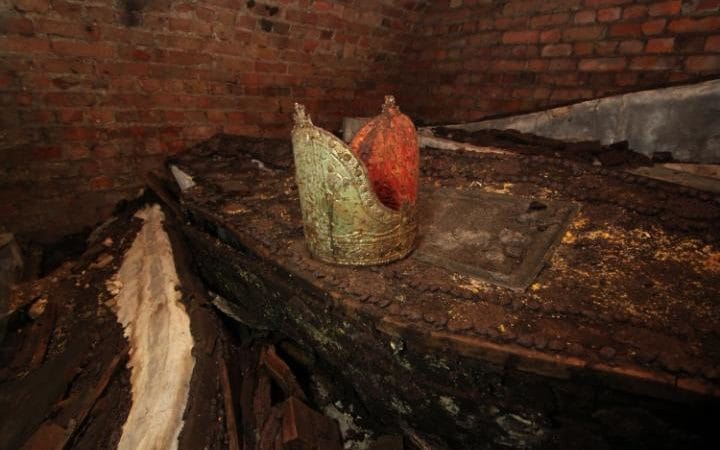 LONDON, ENGLAND—The Telegraph reports that 30 lead coffins were found in a hidden chamber beneath the altar of the deconsecrated church located next to Lambeth Palace, the thirteenth-century London residence of the leader of the Church of England. It had been thought that all of the burials under the 1,000-year-old church were removed in the nineteenth century when the structure was refurbished, but scholars now know that the remains of the archbishops were not disturbed. A gilded funerary miter found resting on a coffin was the first clue to the identity of the deceased. Metal name plates on two of the coffins revealed that they indeed held the remains of former Archbishops of Canterbury: Richard Bancroft, who served as archbishop from 1604 to 1610 and oversaw the publication of the King James Bible; and John Moore, who served from 1783 to 1805. Church records have revealed that three additional Archbishops of Canterbury were probably buried in the vault during the seventeenth and eighteenth centuries. Although the coffins will be left undisturbed, a glazed, manhole-sized panel has placed over the entrance to the tomb in the chancel so that museum visitors can see the steps leading to the vault. To read more about the archaeology of English churches, go to "Writing on the Church Wall."