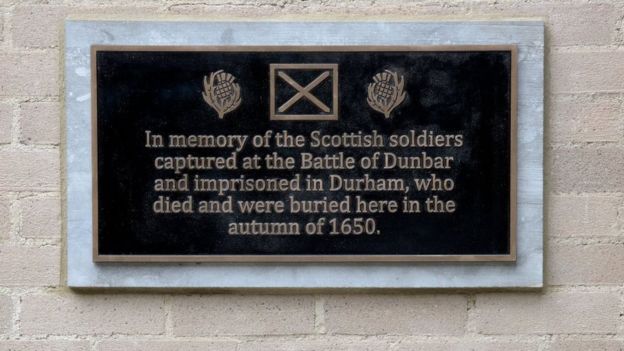 DURHAM, ENGLAND—The National reports that Durham University hosted an event to commemorate the lives of the Scottish soldiers taken prisoner after the Battle of Dunbar in 1650 and imprisoned in Durham. A plaque in Durham Cathedral, which had stated that the soldiers’ burial place was unknown, has been updated, and a new plaque has been placed in the courtyard at Palace Green Library. The remains of some 1,700 of these men were found in a mass grave during the construction of the library, which began four years ago. Researchers have studied the remains to learn about the lives of the Scottish soldiers who died while imprisoned in England, and they have tracked down what happened to those who survived the battle and imprisonment. Their descendants were consulted in the creation of the new plaque, made of stone quarried at the site of the Battle of Dunbar. “It is our intention through this project to give these individuals a voice in our history,” explained Stuart Corbridge, vice-chancellor and warden of Durham University. The soldiers’ remains will eventually be reburied in a cemetery close to the original site of the mass grave. To read an in-depth article about the prisoners, go to "After the Battle."