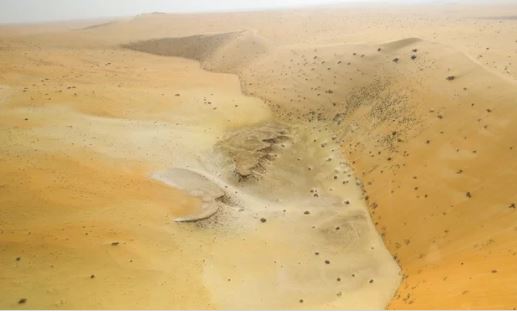 LONDON, ENGLAND—According to a report in Live Science, a team led by landscape archaeologist Paul Breeze of King’s College London used high-resolution satellite imagery, aerial imagery, and geological maps to identify 46 archaeological sites beside ancient lakes in Saudi Arabia’s western Nefud Desert. Their research suggests that hominins migrating out of Africa may have traveled further into Arabia than had been previously thought. Breeze and his team traveled to some of the sites, where they took sediment samples of the lake beds, many of which are thought to have been situated in basins between sand dunes. They also found tools dating to the Lower Paleolithic period, between 1.8 million and 250,000 years ago. At that time, the region experienced repeated phases of wetter climate, and therefore supported more vegetation and wildlife than it does today. “Based on the geological record, we would expect some level of greening of Arabia to happen once more in the future,” said Breeze, “although likely not in the near future, and it is unclear how human influence on the climate might affect this.” For more, go to “Fact-Checking Lawrence of Arabia.”