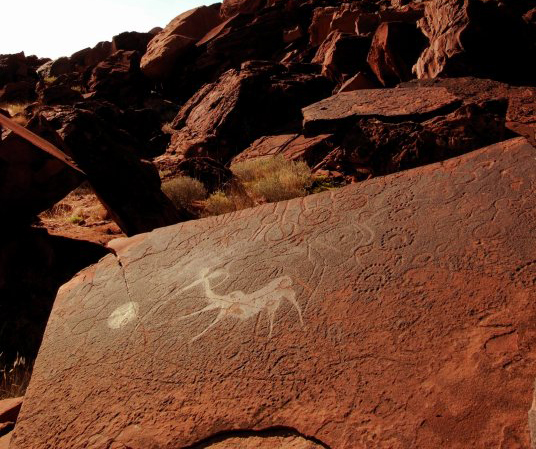 WINDHOEK, NAMIBIA—A recent survey of rock art in the Namib Desert is yielding new insights into the cultures of ancient hunter-gatherers, reports the International Business Times. Among the most intriguing rock art panels recorded by the survey is one that depicts a female antelope, or kudu. Dating to perhaps 3,000 years ago, it probably played a role in female initiation rituals, says Quaternary Research Services archaeologist John Kinahan. Such rituals took place in isolated locations in ritual seclusion shelters, which the rock art panel also appears to depict. Nearby, Kinahan identified a stone circle that is likely the remains of one of the shelters. “It is possible that the sociable characteristics of the female kudu were given as example to follow to young girls who prepared to become women,” says Kinahan. “Kudus are docile and sociable, they look after the youngsters all together and collaborate without the males. These characteristics were probably seen as desirable for women to have.” To read more about archaeological discoveries in southern Africa, go to “The First Use of Poison.”