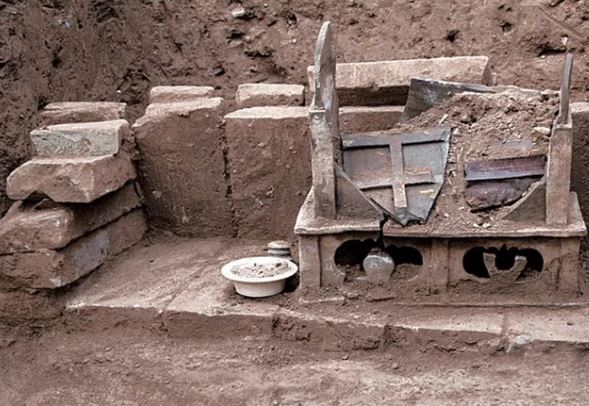 JINGCHUAN COUNTY, CHINA—An excavation in northwest China has uncovered a 1,000-year-old ceramic box containing cremated human remains said to have belonged to Siddhārtha Gautama, also known as the Buddha, according to a report in Live Science. An inscription on the box explains that two monks, named Yunjiang and Zhiming, of the Mañjuśrī Temple of the Longxing Monastery collected the more than 2,000 pieces of cremated remains, including teeth and bones, over a period of 20 years, and buried them in the temple on June 22, 1013, as a way to practice and promote Buddhism. More than 260 Buddhist statues, and the remains of a building that may have been part of the monastery complex, were also found. Hong Wu of the Gansu Provincial Institute of Cultural Relics and Archaeology said it was not clear whether the statues, which had been made as early as the fourth century A.D., had been buried at the same time as the cremated remains. Some of the statues, which depict the Buddha, bodhisattvas, arhats, and deities, stood more than six feet tall. Few of the statues had been inscribed, but carved steles were also recovered. For more, go to “The Buddha of the Lake.”