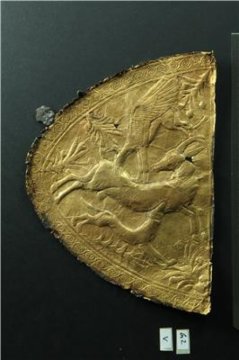 TÜBINGEN, GERMANY—Ahram Online reports that a German-Egyptian team of researchers and conservators has examined a collection of pieces of embossed gold from Tutankhamun’s tomb. The artifacts were discovered on the floor of the tomb’s antechamber and in the treasury, close to the royal chariots, and were photographed by Howard Carter’s team in 1922. Due to their delicacy, the objects were then packed away and placed in storage at Cairo’s Egyptian Museum, where they remained for more than 90 years. Conservators Christian Eckmann and Katja Broschat of the Römisch-Germanischen Zentralmuseum Mainz reassembled the fragments of gold into pieces they suspect were decorative fittings for quivers and bridles. Archaeologist Julia Bertsch of the University of Tübingen said the embossed decorations include motifs from Egypt and the Middle East. Differences in the composition of the gold in different pieces suggest the artifacts were crafted in different workshops. To read about a recent discovery in Egypt, go to “In the Time of the Rosetta Stone.”