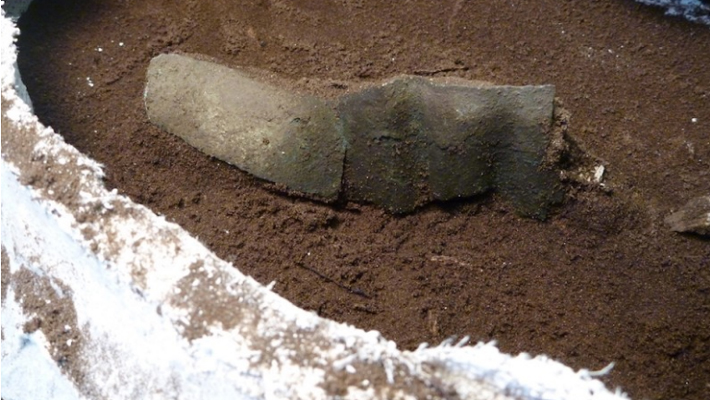 BINGHAMTON, NEW YORK—According to a Science News report, hunter-gatherers living in North America some 4,000 years ago may have had direct trade links spanning 900 miles. A ceremonial copper object has been found surrounded by a ring of seashells at an ancient grave site on St. Catherines Island off the coast of Georgia. Known as the McQueen shell ring, the circle of shells measures nearly 230 feet across. At its center, anthropologist Matthew Sanger of Binghamton University and his colleagues unearthed a pit containing the copper band, bits of stone tools, and tens of thousands of ash-encrusted bone and tooth fragments representing at least seven individuals. Such cremation burials are rare in the Southeast for this period, Sanger said. Chemical analysis of the copper band, which has been radiocarbon dated to between 4,300 and 3,800 years old, indicates it originated in copper mines at Lake Superior, in an area where cremation burials from this period are found more frequently. People living in the Southeast and Great Lakes regions may have gathered together at Georgia’s McQueen shell ring, Sanger explained, for seasonal ceremonies, where they feasted on fish, clams, oysters, hickory nuts, and acorns. To read about the possible function of "bannerstones" made by prehistoric Native Americans, go to "Set in Stone."