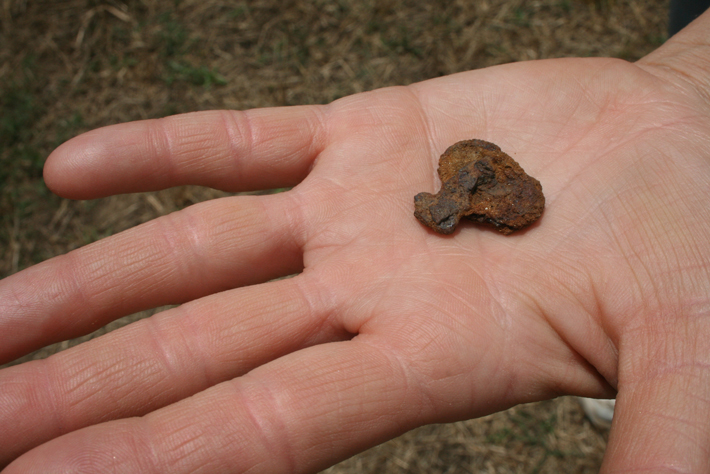 SWANNANOA, NORTH CAROLINA—A team of researchers led by David Moore of Warren Wilson College has found a small piece of plate armor at Fort San Juan, a well-preserved fort built by Spanish soldiers some 450 years ago on the site of the Catawba town of Joara in what is now western North Carolina, according to a Blue Ridge Public Radio report. Moore said the soldiers took over the town and forced the Catawba to build homes and cook meals for them. “So this relationship of two groups understanding each other very poorly, trying to figure out what to do with the other was constantly in the air,” he explained. The small piece of plate armor, which would have been sewn into a garment, had been placed vertically in the soil next to a post in a Spanish soldier’s house. Moore thinks it may have served as a talisman against black magic. “A Spanish soldier had placed this in the building to ward off witches, especially because Indian women were feeding them,” he said. Excavators also found other artifacts from Joara and the fort, including a Spanish clothing hook fastener and a Native American clay pipe. To read about a rare example of indigenous cartography from the colonial period, go to "Mapping the Past: Catawba Map."