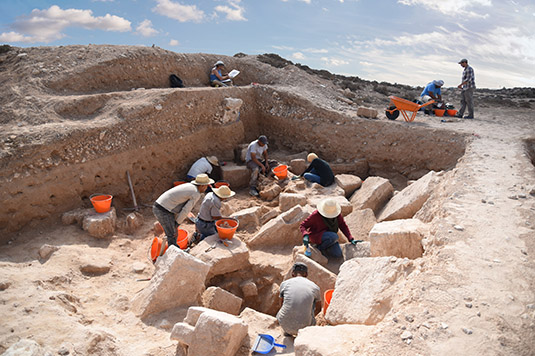 MUNICH, GERMANY—A magnetometer survey in Djerba, an island off the coast of Tunisia, has mapped the site of the ancient commercial center of Meninx, according to a statement released by Ludwig Maximilian University. The city was founded in the fourth century B.C., and became a trade power between the first and third centuries A.D. Archaeologist Stefan Ritter and his colleagues investigated the city’s well-protected port, which had a wide, deep channel in its shallow bay, wooden and stone quays, and warehouses for storing goods. The survey also revealed that the city’s streets ran parallel to the island’s coastline. Ritter said he and his colleagues carried out some excavations, and uncovered a private bathhouse with mosaic floors, wall paintings, and statuary. New evidence suggests that the purple dye produced by the city’s residents from the sea snail Murex trunculus was not exported as a raw material, but rather used at Meninx to dye textiles for export. To read about the discovery of a submerged Roman mercantile city, go to "World Roundup: Tunisia."