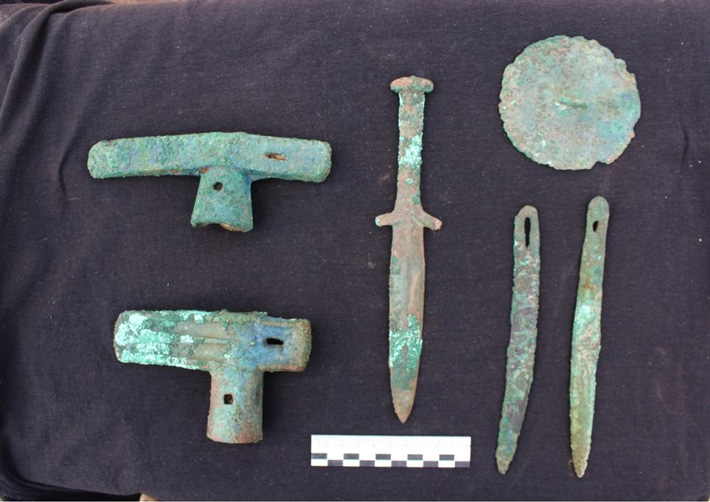 KHAKASSIA, RUSSIA—Live Science reports that researchers from Siberia’s Institute of Archaeology and Ethnography discovered the 2,500-year-old remains of a man, a woman, a newborn infant, and an older woman in a grave that also held full-sized bronze daggers, knives, axes, mirrors, and a miniature comb made of animal horn. These nomadic Scythian warriors, who may have been killed by an illness, belonged to the Tagar culture, whose members are known to have buried their dead with miniatures of everyday objects. The man and woman were placed in the grave on their backs next to large ceramic vessels. Two bronze daggers and two axes were also set by the man, while one bronze dagger, one ax, and a hatchet or long-handled ax were placed by the woman’s remains. Oleg Andreevich Mitko of Novosibirsk State University said that Tagarian women were usually buried with long-range weapons such as arrowheads. The older woman, estimated to be about 60 years old at the time of death, was placed on her side with her knees bent at the feet of the other two adults. A small ceramic vessel and a comb with broken teeth was placed next to her. DNA analysis may reveal if the grave’s occupants were related to each other. To read about recently unearthed burials of female Scythian warriors, go to "Arms and the Women."