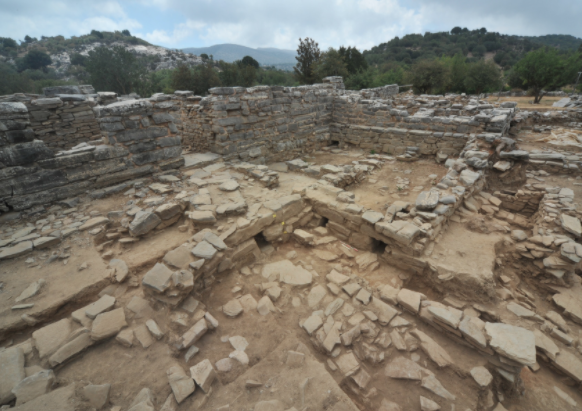 ATHENS, GREECE—The National Herald reports that excavators led by archaeologist Efi Sapouna-Sakellaraki at the site of Zominthos, a palace built around 2000 B.C. on Crete’s Mount Psiloritis, have uncovered two additional complexes that were constructed around 1700 B.C. One of these additions may have served as a religious sanctuary. Last year, the team members uncovered an altar in this area. This year, they found a burnt wooden object surrounded by gold flakes that may have been a statuette covered in gold leaf; a pestle; a seal depicting an animal; and traces of an earlier sanctuary dating back to 1900 B.C. A figurine dubbed the “Lady of Zominthos” was recovered from this earlier sanctuary. The second room, constructed with flagstone floors and both a sophisticated drainage system and a sewage system, contained a seal bearing a flower image dated to 2000 B.C. Pottery at the site indicates it was occupied even before the first palace was built, while a coin issued by the Doge of Venice between 1289 and 1311 attests to Venetian rule of the island during the Fourth Crusade. For more on ancient palaces on the island, go to "The Minoans of Crete."