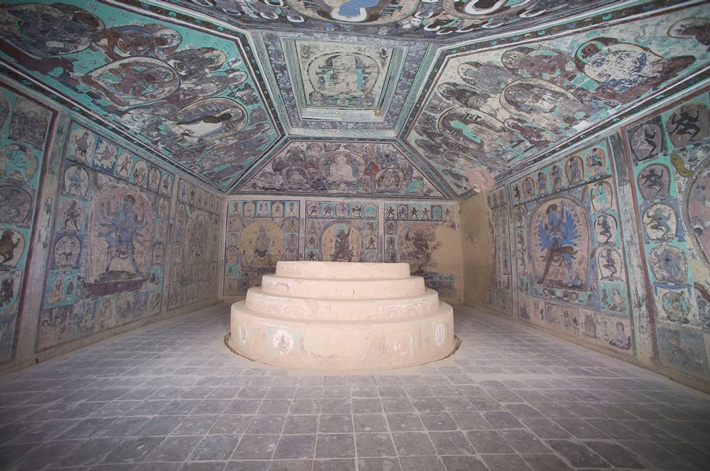 NOTTINGHAM, ENGLAND—Researchers from Nottingham Trent University, the Dunhuang Research Academy, and the British Library employed remote spectral imaging to examine the paintings within Buddhist temples in northwestern China’s Mogao Caves, according to a Nottinghamshire Live report. In Cave 465, the high-resolution images showed previously unknown Sanskrit script at the foot of each of the Five Celestial Buddhas painted on the cave’s ceiling. Team member Haida Liang said the text had been written in cinnabar on paper that was then pasted on the ceiling, perhaps as part of a consecration ritual. The study also showed that one of these inscriptions had been glued face down, so that the letters were flipped. The workmen were unlikely to have been able to read Sanskrit, Liang explained. Analysis of the writing style and the formulas of the paint pigments has helped to date the temple to sometime after the late twelfth century A.D. “This has been a huge debate for many years, but now our analysis has enabled us to date this cave with much more certainty than ever before,” she said. To read about a Ming Dynasty Buddha statue and temple found underwater in southeastern China, go to "The Buddha of the Lake."