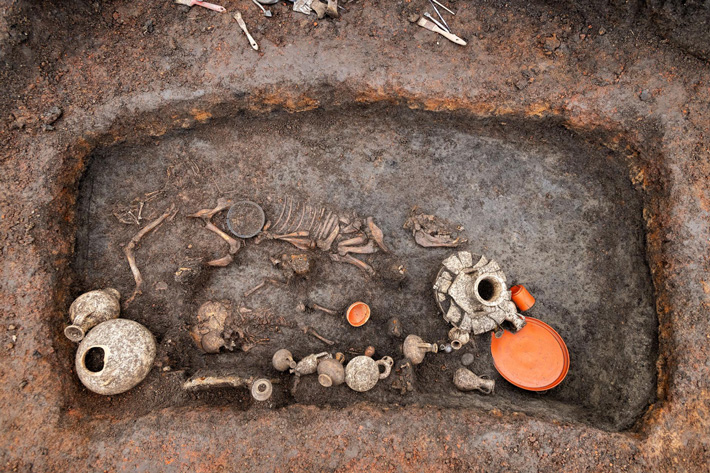 CLERMONT-FERRAND, FRANCE—The Guardian reports that a 2,000-year-old grave containing the remains of a one-year-old child and a dog were unearthed at a construction site in central France by researchers from France’s National Institute of Preventive Archaeological Research. The child’s coffin was made of wood held together with nails and marked with a decorative iron tag. An ornamental copper pin had been used to fasten the child’s burial shroud. An iron ring attached to a bent metal rod may have been used as a toy. It was found between the legs of the young dog placed at the child’s feet. The pup was wearing a collar with bronze decorations and a small bell. Pottery, glass vessels, and the remains of a large feast, including half a pig, three hams, two headless chickens, and other pieces of pork had been placed around the coffin. An older child’s baby tooth was found on a fragment of a broken shell. Roman adults were usually cremated, the researchers explained, while toddlers were sometimes buried near the family home, which suggests a large villa may be located in the area. To read about a Gallo-Roman necropolis next to the Roman amphitheater at Saintes, France, that included child burials, go to "Shackled for Eternity."