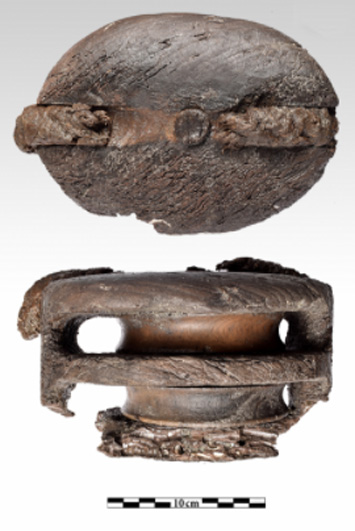 ATHENS, GREECE—Neos Kosmos reports that underwater archaeologists under the direction of Dimitris Kourkoumelis of the Greek Ephorate of Marine Antiquities have returned to the wreckage of Mentor, which sank in a storm off the coast of the island of Kythira in 1802. The ship had been carrying Greek antiquities collected by the Scottish nobleman Thomas Bruce, Seventh Earl of Elgin. The crew and passengers survived the ordeal, and Lord Elgin was not on board at the time. The researchers recovered clothing, wood and metal pieces of the ship’s rigging, the leather sole of a shoe, a belt buckle, cooking utensils, chess pieces, and a metal coin featuring a picture of a ship that may have been used as a gaming token. Lord Elgin later paid local sponge divers to recover antiquities that had gone down with the ship, including the sculptures he had removed from the Parthenon, and transported them to England on another vessel. For more on the shipwreck, go to "Around the World: Greece."