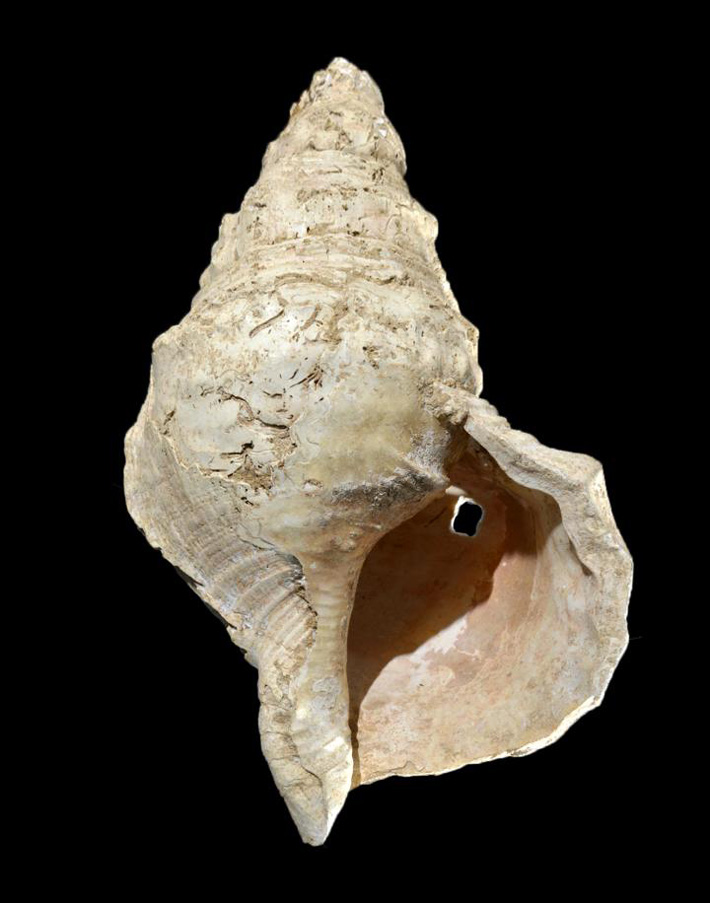 TOULOUSE, FRANCE—Gizmodo reports that a new analysis of a conch shell discovered in southern France’s Marsoulas Cave in 1931 suggests it was played as a musical instrument, and not used as a ceremonial drinking vessel, as had been previously thought. Known as the Marsoulas conch, the shell has been dated to the Magdalenian period, between 17,000 and 11,000 years ago. It was decorated with red ochre whose chemical composition matches that of the rock art in the cave. Modifications made to the shell include the chipping away of its outer lip, and the removal of its pointed tip. Brownish material at this opening may be adhesive applied to secure a mouthpiece. CT scans of the shell revealed two internal holes that could also have been used to secure a mouthpiece. Musicologist Jean-Michel Court of the University of Toulouse blew air through the hole, and produced three notes approximating C, D, and C sharp. Phillipe Walter of Sorbonne University said sounds produced with the shell would have been amplified by the cave’s acoustics. The addition of a mouthpiece, he added, would likely expand the instrument’s range. The research team plans to create a replica of the artifact for additional tests. Read the original scholarly article about this research in Science Advances. To read about rock art discovered in Brittany after the Magdalenian period, go to "Late Paleolithic Masterpieces."