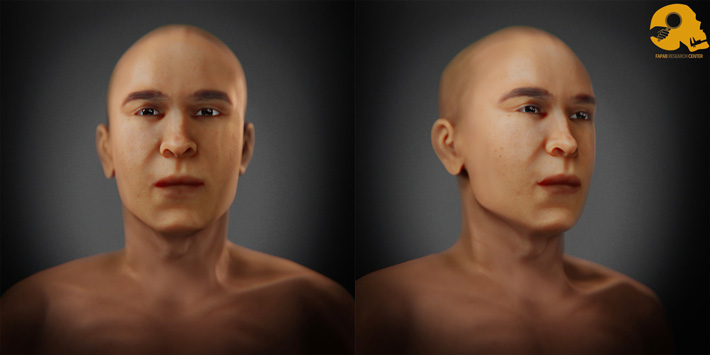 AVOLA, ITALY—A digital model has been made of a human skull recovered in 1907 from tomb KV 55 in Egypt’s Valley of the Kings, according to a Live Science report. Francesco Galassi of Sicily’s Forensic Anthropology, Paleopathology, Bioarchaeology Research Center, and 3-D forensic artist Cicero Moraes, used the Manchester method to add facial muscles and ligaments to the model skull according to the rules of anatomy, Galassi explained. “The skin is placed on top of this, and the tissue thicknesses are average values that have been scientifically determined,” he added. Galassi and his team also relied upon notes, detailed measurements, photographs, and X-rays from prior examinations of the skeletal remains. Genetic analysis suggests that the man may have been Tutankhamun’s father, Akhenaten, who reigned from 1353 to 1335 B.C., although the practice of incest among ancient Egypt’s royal dynasties could complicate scientists' understanding of this genetic data. Examination of the man’s teeth and bones, which were exposed when the mummy was discovered, suggests he was about 26 years old at the time of death. Records suggest that Akhenaten ruled for 17 years, and fathered a daughter during the first year of his reign, thus calling the identification of the man buried in KV 55 into question. To read about Akhenaten's wife, go to "In Search of History's Greatest Rulers: Nefertiti, Great Royal Wife and Queen of Egypt."