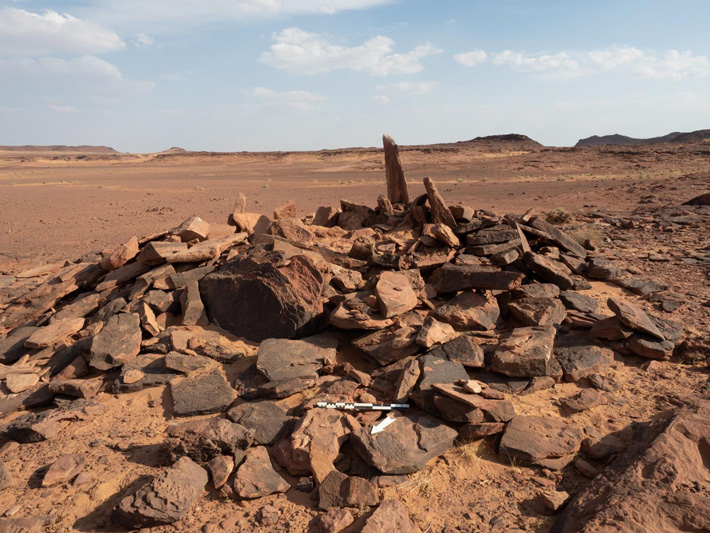 RIYADH, SAUDIA ARABIA—According to a statement released by Taylor & Francis, the remains of a dog and 11 people have been found in a monumental tomb near the region of Al-Ula, which is located in northwestern Saudi Arabia. The tomb, dated to 4300 B.C., was discovered at a volcanic uplands site during a survey that employed satellite imagery and aerial photography. It is thought to have been in use for a period of at least 600 years. Melissa Kennedy of the Aerial Archaeology in the Kingdom of Saudi Arabia, Al-Ula (AAKSAU) project said residents of the ancient village may have remembered for hundreds of years that their kin had been buried in the tomb, which would have been highly visible on the landscape. The dog remains push back the evidence for dog domestication in the Arabian Peninsula by about 1,000 years, she added. A leaf-shaped mother-of-pearl pendant was also recovered from the site. Rock art in the region depicts dogs assisting with the hunting of ibex and other animals. A second tomb, dated to the fourth millennium B.C., was found some 80 miles away in arid badlands. This tomb yielded a carnelian bead and would have also been a recognizable feature in the surrounding scenery, Kennedy said. To read about a 7.500-year-old stone monument recently discovered near the oasis of Dumat al-Jandal, go to "Around the World: Saudi Arabia."