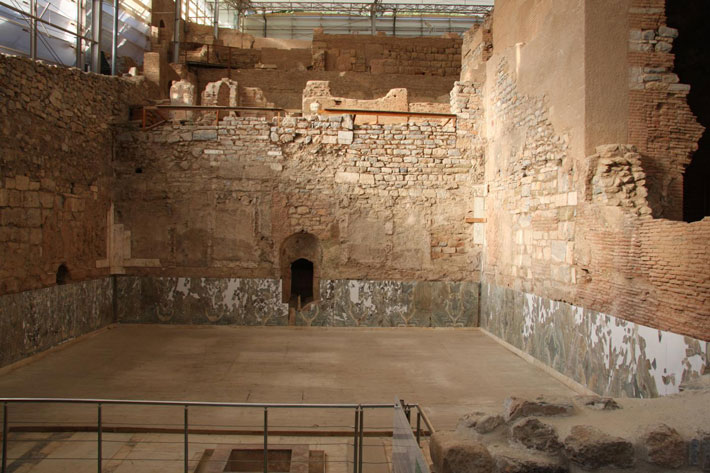 MAINZ, GERMANY—According to a statement released by Johannes Gutenberg University, researchers led by Cees Passchier employed software usually used for 3-D modeling geological formations to examine pieces of marble recovered from a second-century A.D. villa in Turkey’s ancient city of Ephesus. The thin sheets of green-veined cipollino verde quarried on the Greek island of Euboea were used as cladding to decorate the walls of a room in the villa. Saw marks on the marble indicate that the slabs had been cut in a water-powered sawmill. Analysis of these marks and the veining in the marble suggest that 42 slabs, each measuring about three-fifths of an inch thick, were cut from a single block weighing three to four tons. The slabs were then hung side by side in book-matched pairs in the order in which they had been cut to produce a symmetrical pattern, Passchier explained. A digital reconstruction of the process suggests that only about three-tenths of an inch of material was lost with the cutting of each slab. An interruption in the pattern indicates that two of these slabs were not hung, however, perhaps because they had been broken during polishing or transportation. This is still only a five percent loss, Passchier said. The block was probably transported intact from Greece and cut at Ephesus, he added. To read about a massive marble plan of ancient Rome, go to "Mapping the Past: The Forma Urbis Romae."