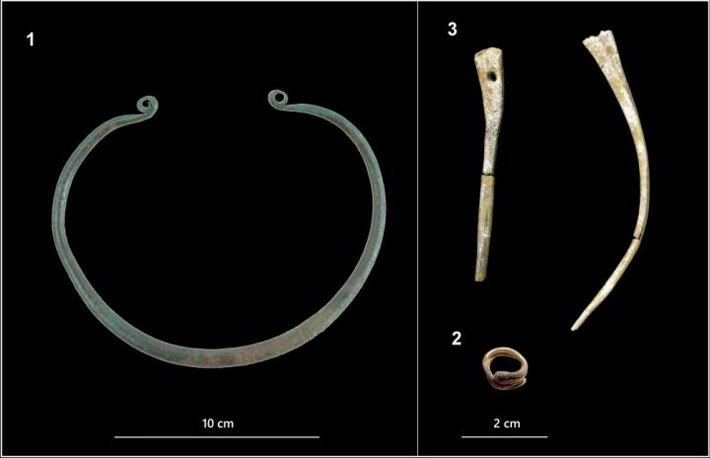 BOLOGNA, ITALY—According to a Live Science report, researchers led by Claudio Cavazzuti of the University of Bologna have examined the contents of an elite burial urn recovered from a Bronze Age cemetery discovered at a construction site near the Danube River in northern Hungary. Thousands of burials belonging to the Vatya culture are expected to be found in the cemetery, Cavazzuti explained. Although this particular urn appeared to be similar to the several hundred that have been excavated so far, its contents included the remains of a woman who died between the ages of 25 and 35, her two infants estimated to have been between 28 and 32 gestational weeks old, a bronze neck ring, a gold hair ring, and bone pins or needles. Chemical analysis of the woman's teeth indicates that she was born somewhere else, and moved into the community between the ages of 8 and 13. Cavazzuti and his colleagues think the neck ring and pins or needles may have come from the woman’s homeland, while the gold hair ring may have been a wedding gift and a symbol of high rank in the community. Most of the other urns in the study sample contained the remains of just one person and simple grave goods made of ceramic or bronze. Read the original scholarly article about this research in PLOS ONE. To read about bronze bird figurines unearthed in Slovakia, Italy, and Hungary, go to "Swan Songs."