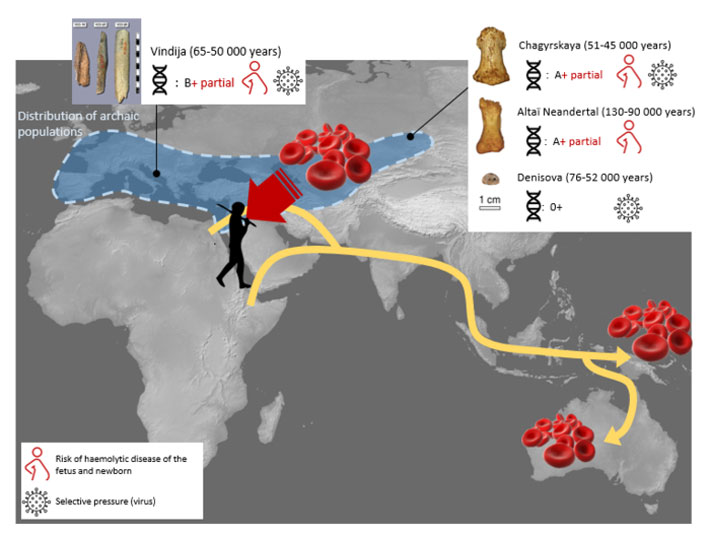 MARSEILLE, FRANCE—According to a Cosmos Magazine report, paleoanthropologist Silvana Condemi and her colleagues at Aix-Marseille University used information from three Neanderthal genomes and one 64,000-year-old Denisovan genome to investigate their blood types. Only one Neanderthal’s blood had been typed in the past, and was found to be type O under the ABO system used to classify the blood of modern humans. Since all chimpanzees are type A, and all gorillas are type B, it was assumed that all Neanderthals were type O. But the new study found that the Neanderthal woman’s 100,000-year-old remains from Siberia’s Denisova Cave had type A blood; the Neanderthal woman’s 48,000-year-old remains from Siberia’s Chagyrskaya Cave also had type A blood; and the Neanderthal woman’s 64,000-year-old remains from Croatia’s Vindija Cave had type B blood. All three Neanderthals, however, carried a now-rare Rhesus type called “Rhesus plus incomplete,” which had only been found in the DNA of one member of Australia’s Western Desert Aboriginal people. “At the time, it was assumed to be a new Rhesus type that had arisen in Australia,” Condemi said. The rare Rhesus type has also now been found in 80 people from Papua New Guinea. “Now we know that it had existed in the past and was lost,” Condemi explained. Read the original scholarly article about this research in PLOS ONE. To read about sequencing of Neanderthal DNA from remains uncovered at Vindija Cave, go to "Neanderthal Genome," one of ARCHAEOLOGY's Top 10 Discoveries of the Decade.