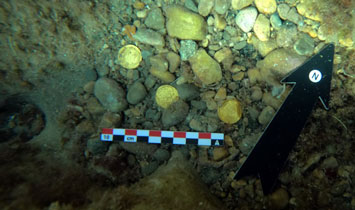 XÁBIA, SPAIN—Two brothers on vacation with their families discovered a hoard of 1,500-year-old gold coins while snorkeling along the Mediterranean coastline of eastern Spain, according to a Live Science report. After recovering a total of eight coins, the brothers reported the find to the authorities, and returned to the site with archaeologists from the University of Alicante, the Soler Blasco Archaeological and Ethnological Museum, and the Spanish Civil Guard Special Underwater Brigade. The researchers discovered more than 50 additional coins dated from A.D. 364 to 408, which spans the time of the split of the empire in A.D. 395 into the Western Roman Empire with Rome as its capital, and the Byzantine Empire to the east, with Constantinople as its capital. The well-preserved coins bear images of Valentinian I, Valentinian II, Theodosius, Arcadius, and Honorius. Three nails thought to be made of copper and lead from what may have been a sea chest were also unearthed, although no sign of a shipwreck has been found in the area. Jaime Molina Vidal of the University of Alicante said the treasure may have been buried in the early fifth century as the Western Roman Empire collapsed and Hispania fell to non-Roman invaders. To read about the importance of Spain's silver mines to the Roman economy, go to "Spain's Silver Boom."