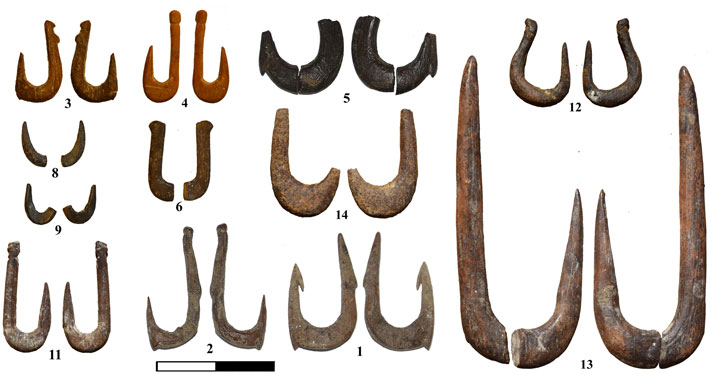 MAINZ, GERMANY—Courthouse News Service reports that a 13,000-year-old collection of 19 bone fishhooks and six grooved pebbles thought to have been used as sinkers has been unearthed on the banks of the Jordan River in northern Israel by a team of researchers led by Antonella Pedergnana of the Archaeological Research Centre and Museum for Human Behavioral Evolution. The waterlogged conditions at the site, thought to have been used intermittently over a period of 10,000 years, helped to preserve the rare artifacts. The hooks vary in size and shape, presumably to catch different types of fish. Some of the hook shanks bear grooved lines or knobs from binding, wrapping, and tying fishing line. Two of the hooks also bear deep grooves and traces of adhesives and animal hair thought to have been used as lures. Shiny bits of mother-of-pearl may have even been added to the lures to spin in the water. The small size of these hooks suggests that they were used in a manner similar to that of modern fly-fishing. Read the original scholarly article about this research in PLOS ONE. To read about a 5,000-year-old bone fishhook found in Norway, go to "Artifact."