Earthen Mound in Louisiana Dated to 11,000 Years Ago 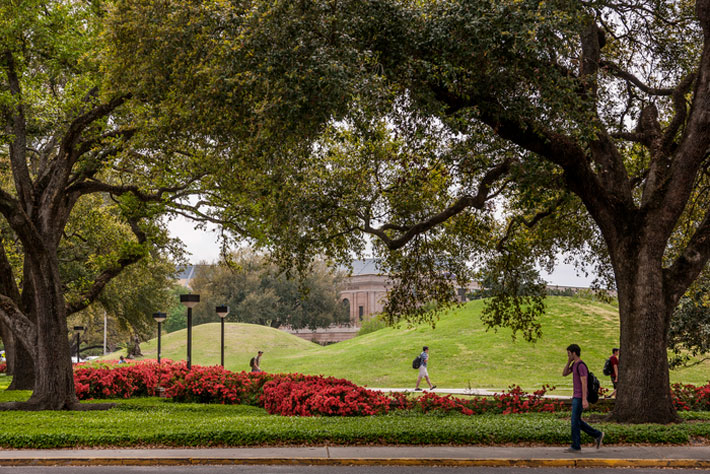 BATON ROUGE, LOUISIANA—According to a statement released by Louisiana State University, professor emeritus Brooks Ellwood and his colleagues have radiocarbon dated microscopic bits of charred mammal bone known as osteons and the ashes of burned reeds and cane plants found in the layers of sediment cores taken from the two 20-foot-tall earthen mounds on the Louisiana State University campus. The researchers suggest that the plants may have been burned to create very hot ceremonial fires, perhaps to cremate animals. The study also indicates that construction of the southern mound, known as “Mound B,” began some 11,000 years ago. A large depression in the ground on campus may have been a source of building material. The study suggests that the structure was then abandoned around 8,200 years ago, around the time that temperatures in the northern hemisphere dropped about 35 degrees Fahrenheit, Ellwood said. Tree roots in this layer suggest that the site had not been used for about 1,000 years when construction of “Mound A” began with mud taken from a nearby estuary. Both mounds reached their current heights about 6,000 years ago, Ellwood explained. Astronomer and team member Geoffrey Clayton suggests that the crests of the finished mounds align with Arcturus, one of the brightest stars of the night sky. To read about massive earthworks constructed some 3,200 years ago at Louisiana's Poverty Point, go to "Archaic Engineers Worked on a Deadline."