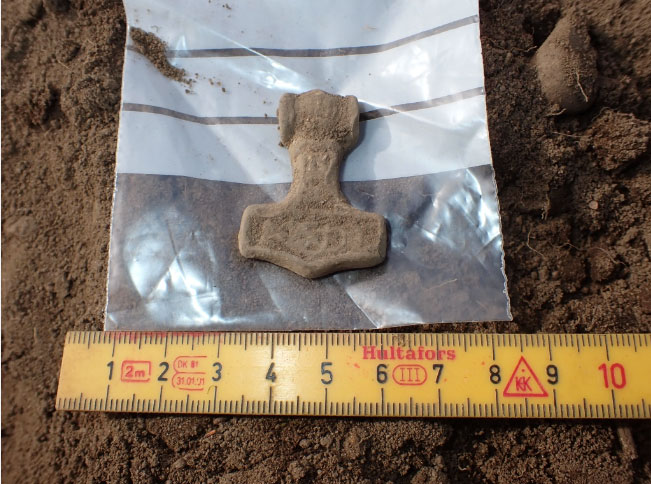 YSBY, SWEDEN—Ahead of construction of a housing development at a site in southwestern Sweden, archaeologists unearthed a metal amulet in the shape of Mjölnir, the Norse god Thor's hammer, Live Science reports. Dating to the period between the ninth and eleventh centuries A.D., the amulet is the first of its kind to be found in this region. It is decorated with embossed designs, and may have originally been covered in gold or silver. A hole through the hammer's handle would have enabled the amulet to be strung and worn as jewelry. According to archaeologist Per Wranning of the Halland Museum of Cultural History, people might have worn objects like this to signal their religious leanings at the end of the Viking Age, when Christianity began to supplant worship of the old Norse gods in Scandinavia. Researchers have also excavated firepits, postholes, pottery, and other metal items at the site. To read about excavations of a Viking-era Norse temple, go to "Around the World: Norway."